“Sure stick him in corner forward. He’ll have the beating of their corner back for pace”, said every gaelic football club manager ever as the rising 16 year old star makes his premature debut for the senior team. Often times this 16 year old might not even be that particularly talented, numbers are just low on the day and he gets thrown in the deep end.  On the same day the opposition, also short a few players, could call upon the services of their 38 year old selector who thought his playing days were over when they won the Junior B championship 10 years ago. “You’ll be fine sure you were always a good reader of the game”. But what are the potential consequences of mixing these different athletic groups of different abilities, most importantly different ages? Should this 16 year old be pitted against fully grown adults, in some cases men coming to the end of their playing careers? How is the soon-to-be retired player likely to react when he gets turned inside out for the 5th time in a row by this little whippet? Is it fair to put this weight on the shoulders of our young athletes? Or is it an opportunity for them to further progress against tougher opposition? A chance to mature as athletes and individuals? I’ve been both this 16 year old player and the frustrated elder statesman given the job of marking such a live wire.  A 16 year old is a child and there are more than just physical differences between children and adults. There are also mental, social and maturation differences that separate both groups. Therefore asking children to equal the demands of their adult counterparts may be a bridge too far.

Children get involved in sport to play, not win. And being active through play is important for unlimited health reasons. 80% of obese children go on to be obese adults as discussed in previous weeks. When asked 90% of children said they would rather play on a losing team than be on the bench of a winning team. Winning is very much a secondary reason for a child’s participation in sport, certainly early on. The main aim of sport is opportunity for a child to grow as a person while at the same time having some fun. It introduces a child to team work, cooperation and problem solving, skills directly transferable to life. Ask any adult why they participate in sport and apart from fun (hopefully) the reasons will be goal orientated around winning in some shape or form, whether its beating a personal best for a 10k run, or gaining promotion to a higher division.

From an injury point of view the most important factors are the physical differences. The paediatric athlete is a youngster who is still growing. Because of this they have growth plates in their bones essential for long bones to grow. This is the most important physical difference especially from an injury point of view. Damage such as fractures around the site of growth plates can be a serious injury and if suspected should always be ruled out with xray, particularly around the hip. Stress fractures are common particularly around the wrist and forearm as children explore their body’s limitations with jumps from trees and swings which are usually incomplete “green stick” fractures.

Cartilage is more prone to damage in growing bones because during growth cartilage is softer and more plastic to adapt to the growth occurring. During growth spurts sometimes the bone lengthens at a rate the muscle and tendon cannot keep up with causing pain around the insertion of the tendon onto the bone. Typical sites of injury with this are the knee and heel (Osgoods Schlatters and Severs, respectively). Likewise with children the ligament can be stronger than the bone around these areas. Instead of the ligament tearing it can sometimes pull the bone it attaches to with it.

Despite injury most children will not want to stop exercising (thankfully). A much worse scenario would be the opposite.  They are not mature enough to make the informed decisions regarding rest and equally when it is ok to return after injury. This is the role of the parent and coach and highlights the importance of having an understanding of the differences between children and adults and the different array of injuries they will present with. Telling a child they can’t kick ball for the next 3-4 weeks is not an enviable task and not something I would prescribe as advice. While complete cessation of exercise may not be necessary it may mean holding off one or two days a week or for those immersed in different disciplines maybe only doing one of their 3 activities per day (good news for Mam and Dad taxi services) until symptoms settle down and they do. Strengthening and mobility exercises prescribed by Chartered Physiotherapists will help with this.

Like adults, childrens training should be monitored in some form particularly during times of injury. This gives information on what are the key activities that might be causing or aggravating an injury. The frequency, intensity and duration can then be adjusted accordingly to strike a balance. This can be documented by a parent or coach.

And so to the parent. We all want the best for our kids and for them to achieve in all they do but most importantly they need to enjoy it. All throughout my childhood playing days it was a parent of a team mate that coached whatever the team was. Who else is going to volunteer on a weekend morning to organise and coach a bunch of children? But it is when that parent becomes too emotionally involved that the cracks can unfold and we see the vicarious athlete; the parent pressures the child to excel so the parent can experience the child’s success vicariously, i.e.  live the experience through the child. An extreme case of this was seen in France where a tennis coach (and parent) drugged the opposition players to gain advantage for his children (16 and 13 year olds) who were competing at high level. This tragically resulted in the death of one of the players and the coach was sentenced to jail time. While this is an extreme example we can very quickly get caught up in winning when really winning is way down the agenda for most children. In clinic I have seen instances where the child feels trapped by their parent or coach by the pressure to excel and the only way to break the cycle of pressure is to become injured. It is a way out for them where they can be told by a professional they need to take a break and they will develop an injury typical to their sport. 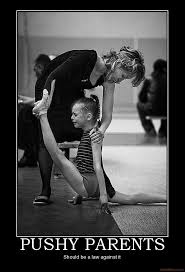 The Take Home messages from this are clear: Children are not mini adults. They experience a different group of injuries to adults and hence need to be managed differently. Allow them to enjoy their sport for as long as they can. This will hopefully allow them to still be interested in later years when the time is appropriate for the competitive phase.God knows they will have long enough to worry about winning and in the case of most of us, losing.

View all posts by mccabephysiotherapy